Between May 1898 and October 1901, John Millington Synge, a Dubliner, spent just under four months (accumulated over four separate visits) on Inishmaan, the middle island of the three Aran Islands lying off the West Coast of Ireland. His first visit was in May-June, 1898; his second in September, 1899; the third in September, 1900; and the last one occurred in September, 1901. From the diary and notebooks he kept while there, he composed his volume, The Aran Islands, completed in 1901, but unpublished until 1907. It was in this same year, 1907, that his masterpiece, The Playboy of the Western World, caused riots when performed for the first time in the Abbey Theatre. Having written a number of other plays (some of whose plots had their originating seeds in material in The Aran Islands), as well as prose pieces and a volume of poems, Synge died in 1909, at the age of thirty-eight.

Eamon Grennan (well known Irish poet) has taken a number of fairly representative moments from The Aran Islands and turned them into a kind of collage to represent as much as possible what the book is like and to give as best we can something of it’s flavour. We call this a “dramatic recital.” That is because it is not a play, but it makes use of play-like elements. But perhaps the most important part is played by Synge’s own narrative, and to get that across we’ve divided him into two separate voices – a female voice and a male voice, with the female voice (Tegolin Knowland) often being the more lyrical side of Synge and the male voice (Sean Coyne) the more factual side. Then there are other characters, both male and female, and these are played by Tegolin and Sean also.

It is partly a romantic lyrical evocation of this wild place, partly a series of anecdotes, partly an almost anthropological study of the people’s lives, their habits, their folk-tales and so on. The response both in the “dress rehearsal” preview and in the festival performances at Clifden Arts Festival, Listowel Writers Week, Yeats International Summer School Sligo, Michael Hartnett Festival Newcastle West, Féile Ne Gréine Waterville, was very warm and enthusiastic. Therefore, it seems as if this dramatic recital works as a ‘play for voices’. In terms of theatrical baggage, it is minimalist: two chairs, some nets, a (Lough Corrib mineral water!) box for sitting on, and a simple audio device which Sean operates at intervals to produce our few sound effects. 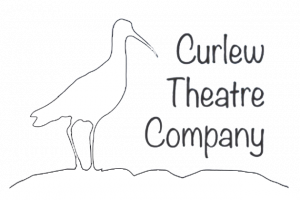